Reply Girls and their Haters January 9, 2013 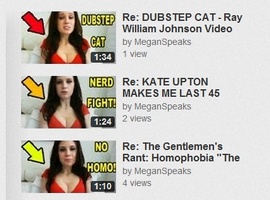 As soon as you inject the possibility of making some cash into something, spammers, opportunists and downright shameless faces seem to pop up everywhere. This is definitely the case for Youtube.

Last year saw the emergence of the Reply Girls; so called “video bloggers” who seek out popular & original videos and then create “reply videos” that link up, where they sit and talk about something random just long enough to have an Ad placed on the stream. The video itself is usually mundane, shallow, pointless, sometimes even random, and often has the girls wearing low cut tops.

One such video was a reply to a basketball game and the dialogue consisted of:

“Hi everyone. So apparently there is a game where two teams play with an orange ball. I think it is called basketball because there is a basket on either end of the court. So I was watching the game and one guy was going to shoot but then they stopped the game. I think he went out of bounds or something. I don’t know. I put a link in the description so you can see it. Oh and follow me because I am blonde”

These so-called Reply Girls have spurned on spit-firing hatred from the online community as rather than creating original, entertaining content, they piggyback quality content for the sake of making a quick buck. Some viewers even went so far as to post Reply Girls’ addresses publicly and urged others to take action.

“[A Reply Girl] copies the original video’s tags and secures herself a spot on its page. Her shirts do the heavy lifting of bringing people to the video, and then a quirk in YouTube’s “related videos” algorithm kicks in: when viewers register their dislike of Gaitan’s video en masse with the “thumbs down” button, it actually drives the video further up the “related videos” ranking. This makes sense — if the Speaker of the House makes a reply to President Obama, Democrats will hit “dislike,” but his video is still a legitimate reply — but it can allow for deeply-hated videos to climb to prominent placement.” 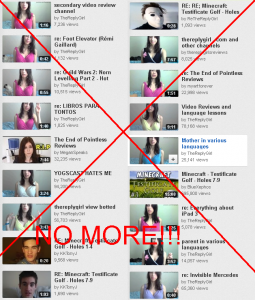 One such girl even donned the username TheReplyGirl and admits she is probably the most hated Youtuber online.  While harmless, other Reply Girls have darker reputations, such as the infamous  MeganLeeHeart (Real name Chrissie Barmore), who was known for sending rival girls death threats and violent messages as well as hosting numerous accounts that were deleted due to “commercially deceptive content.” She and her boyfriend Brian Martin (username LifeInATentto) were subsequently accused of use bots to take out competitor reply girls videos.

While Youtube made some changes to how replies and related videos are now shown in an attempt to remove some of the spam, it still seems that these girls are making a pretty penny. So should these tweenie spammers be banned or are they just picking up on an opportunity that most viewers missed?

Other Posts Related To 'Reply Girls and their Haters'