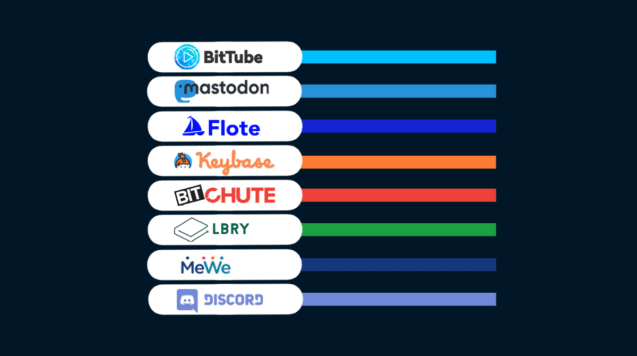 Check out this list of fast movers that threaten some of the existing networks.

An up and coming business-to-business social network that focuses on rich profile information to aid angel and institutional investors. Crunchbase focuses heavily on investment rounds and detailed information about what traffic a business gets and what kind of technology it uses.

A Youtube competitor with a twist, LBRY is one of the most exciting new social media networks underlined by a technology that enables decentralization of administration, which is a new disruptive model in social media.

Another competitor of Youtube with similar characteristics to LBRY in terms of involvement in blockchain and decentralization.

This social network is quite distinct in terms of it’s hosting, which is done by individual servers rather than a central entity. This means that anyone is free to participate using their own instance “server”.

A social network based on the principle of freedom of speech, Flote does not censor or filter it’s content.

A chat/conversation tool, similar and in competition with other chat services such as Skype, Whatsapp, Facebook Messenger and Telegram. Keybase famously boasts the most stringent security and privacy measures.

The brand was slightly undermined after a famous company takeover by Zoom, which has a terrible security track record. However, Keybase remains the strongest privacy messenger in the market.

A video-based social network launched in 2017 poses a threat to websites like Youtube, Vimeo and Dailymotion. BitChute is fast, free and easy to use. It has been building up a steady following. The site received some negative press coverage for some of the content it features, it has however recently become a lot more mainstream.

This community platform started getting traction with gamers that play and chat in real time. It’s great organisational features, quickly led it to spread out and now become a useful tool for community and company management alike.

MeWe has been around since 2012 in it’s first incarnation as Sgrouples. Since then it changed it’s name to MeWe and developed fame as an anti-Facebook social network. MeWe started getting traction in 2015 and whilst it has a lot of Facebook-like features, it’s core difference lies in the strong encryption that provides privacy for it’s users even from the company employees.

Tim Berners-Lee, an early pioneer of the World Wide Web is on the advisory board.

For more information on how to expand your social media marketing get in touch with one of our experts.