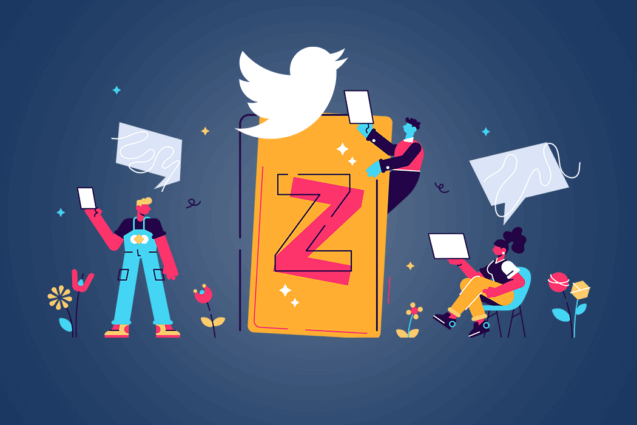 Twitter hopes this will provide brands and creators with new insight into how younger audiences engage on Twitter, what type of content they’re looking for and what brand language appeals to them.

Perhaps the biggest take away from the new report is that younger users are driving the majority of the discussion and engagement on the application.

Twitter has revealed that nearly half of all tweets sent over the course of 2020/2021, came from Twitter users aged 16-24. Any one that falls into this particular age bracket is considered to be a member of the Gen Z cohort.

This is surprising considering the accepted notion that Twitter is a politically-motivated social platform. The general consensus has been that Twitter is rampant with right-leaning and left-leaning discourse and debate. Naturally, conclusions were made that Twitter’s most active user base were aged 25-40 and more politically inclined. We now know this is not the case.

Gen Z comes to Twitter constantly. The youthful demographic relies on Twitter for news, pop culture posts and internet trends. Twitter allows them to connect with communities and interest groups that matter to them.

Twitter also states that, when looking at popular conversations across the network, Gen Z dominates topics such as movies, gaming and food. Gen Zers start trends and keep the trends going with memes and other user generated content.

Twitter has also done research into the type of activity Gen Zers are exhibiting on the app. The social networking platform says that 70% of Gen Z users come to the app to learn and research about new products. A large portion of this percentage also share and comment on said products on their feed.

Gen Zers also come to Twitter to get the feel of brands and whether or not they would like to support them. Twitter’s report said: “Gen Z comes to gauge whether brands are keeping up with cultural and societal conversations happening around us, with many saying they use the platform to comment on how brands are connecting with social issues they care about.”

Various research has suggested that younger consumers are increasingly aware of the social issues brands choose to support, ignore or speak against. Gen Zers are loyal consumers and will only take their commerce to companies that align with their thinking.

Twitter also revealed that Gen Zers interact with ad campaigns more than any other age group on the platform. In a study of four major campaigns on Twitter, Gen Z tweets more than any other generation in 3 of the 4 campaigns. In one campaign, in particular, Gen Z dominated engagement, sending half of all campaign-related tweets.

The report states: “They were especially engaged when there was an element of the campaign they could riff on – something meme-worthy.” This tracks with the notion that Gen Zers are active social users compared to other age groups, who are more passive social commentators.

Following this report, Twitter is recommending brands to take a collaborative approach in their campaigns. This doesn’t refer to joining with influencers but rather instigating user-generated content that builds a community. This, in turn, will allow consumers to learn about a brand’s ideals and values, forging a strong connection.

It is also recommended for brands to lean into meme-heavy content. 38% of Gen Z come to Twitter to see what the latest memes and viral internet trends are. Furthermore, campaigns that sustain attention and engagement, usually do so due to meme-sharing and mimicking – this is when users use the original meme as a template and start an internet trend that ultimately leads back to the campaign.

Gen Zers want to connect with brands socially. A brand that hasn’t quite advertised their social status can target Gen Z by doing ‘Takeover Campaigns’. This is when brands collaborate with other brands or influencers by letting them take control of socials. The takeover will bring a whole new wave of followers to the page and instantly tells them that you have a shared interest. It will then be up to the brand to maintain the same social conscience they have advertised during the takeover.

Gen Zers have grown up with social media. It has always been a part of their lives. They have the same level of affinity for the virtual world as they have for the physical one.

Social media platforms give the younger generation an opportunity to interact and engage with brands and influencers. Which, in turn, gives them the opportunity to assess their marbles and decide if they want to put their back into the campaign.

Twitter’s data shows that Gen Z is a key opportunity for any campaign to stimulate exponential engagement.