Snapchat launches tool to get young people into politics November 4, 2021 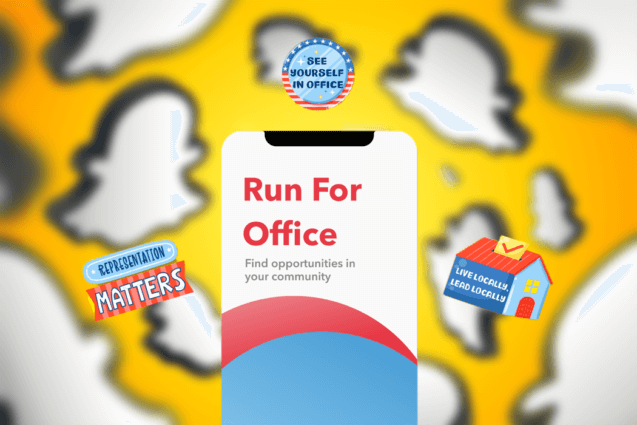 Snapchat has made it very clear that they are a politically active social network. Last year, Snapchat was responsible for getting more than 1 million Americans registered to vote. More than half of these were first-time voters, with more than 80% younger than 30. Their next move is capitalising on the strength of last year’s success but truly targeting the next generation of voters and politicians.

Over the last few weeks, Snapchat has been rolling out a new tool called ‘Run for Office’. This addition has been made to aid young people who have political aspirations and dreams. ‘Run for Office’ has been added with the aim of teaching young consumers of the steps needed to run in local elections. This isn’t a surprise considering that Snapchat reaches 90% of 13-24 year olds in the United States.

Snapchat hopes that this update will not only spur politically-inclined young users to express an interest in running for local elections, but also present said candidates to like-minded potential voters from the same demographic. It is abundantly clear that Snapchat’s user base is younger and more enamoured with concerts and celebs than politics. By encouraging the future political leaders of their consumer base to take a stand, Snapchat hopes to inspire a new wave of first-time voters.

How will ‘Run for Office’ work?

‘Run for Office’ will help eligible Snapchat users find local races that they can run in and, more importantly, are interested in. the tool will analyse a user’s interests and redirect them to relevant political movements. The tool will walk them through what they need to do to become candidates. Furthermore, other Snapchat users will also be able to nominate friends who they think would be a good fit for a particular office.

When users click on the mini tool in Snapchat for ‘Run for Office’, they will be offered two options: one to get started and one to nominate a friend. After making a decision here, users will enter their ZIP code so the app can find races and elections in their local area. The app will then prompt the user to select issues they are interested and passionate about. This will aid the app in finding races that are a good fit with the user’s personality. Some example issues that users will be faced with include immigration, employment, economy, social services and drug policy.

After you have outlined your interests, the app will reveal all the available and relevant offices and campaigns in your area. This includes any organisations at local, regional and national level.

Once you have selected an office, Snapchat will show all the roles available and how the last election went for that role. The app will also show you the requirements needed to run such as age and location of residence. From here, you can team up with organisations for open roles.

The ‘Run for Office’ tool will be available in the app, so you won’t have to leave Snapchat. The tool is from BallotReady, who collect information regarding elections across the whole country. The collaboration with BallotReady speaks to Snapchat’s intentions more than anything. BallotReady is known for creating voter guides in Chicago and helping companies recruit candidates. BallotReady’s collaboration with Snapchat, follows similar initiatives set up at basketball team Miami Heat and NPR.

What has Snapchat said?

Snapchat’s Head of Policy, Sofia Gross, said: “If Snapchatters want to make sure that the issues they care most about are represented by leadership, then they need to run.”

Gross said that Snapchat has noticed that the younger Snapchat user group are politically active, especially with voting. However, Snapchat now wants to be a part of the political solution, rather than just a mirror for its consequences.

Gross finishes by saying: “By starting at the local level, we know that this generation is so passionate about the issues they care about, and so we want to help them understand the different ways they can make a difference in their community based on those issues.”

Only 6% of state officials in America are under the age of 35. Snapchat hopes that the ‘Run for Office’ initiative will help shape a more reflective and democratic process that includes the younger generation.